We have discovered a completely new type of astrophysical object that we have named synestias. These are fascinating objects that have the potential to revolutionize our understanding of how planets form and evolve. Intrigued? Keep reading to learn about synestias. If you want to know more about a particular topic just hit the question marks. ?

The terrestrial planets we see in our solar system today have a lot in common. They are mostly solid, with moderate surface temperatures and the whole mass of each planet is rotating at a single rate. However, planets aren’t always like this. If you heated up, for example, the Earth it would first melt and then the rock at the surface would begin to vaporize. The body would expand, potentially to many times its current size.

If the body was hot enough, and spinning fast enough, the outer edge of the body would be rotating as fast as a satellite in orbit. If the planet continued to get hotter, or spins any faster, the outer edge of the body could not remain rotating at the same rate as the rest of the body. The outer portion of the body would be forced to rotate at near-orbital velocities and form a disk-like region that is continuous with the corotating inner region. ? The rotational and thermal state beyond which a body can no longer rotate at a single rate we call the corotation limit or CoRoL for short. Bodies beyond the corotation limit are unlike any that have previously been studied so we gave them a name, synestias. ?

What is so different?

Once a body is beyond the corotation limit its size and shape are no longer restricted by having to rotate at a single rate. Terrestrial synestias are typically highly extended, many times the size of a cold planet, and can be a wide range of different shapes, from ellipsoids with fins of material extending from the equator to giant red blood cell-shaped structures. ? The cartoon below shows the same mass body but when it is either below (left) or above (right) the corotation limit. The colors indicate the density of the material in the body. The difference in size and shape is substantial.

In order to form synestias bodies are typically very hot and the outer regions of a terrestrial synestia are dominated by rock vapor. There is no surface to the body and the exterior is marked by clouds of molten rock and dust. However, if you were floating out in space looking at the synestia you would probably not be able to see much as the rock clouds are a scorching 2000°C (3700°F) and would be blinding to look at.

The Earth as a synestia

But how do you make a synestia? During the formation of terrestrial planets, large bodies collide together in giant impacts. These are incredibly energetic events which can vaporize several percent of the impacting bodies and leave a rapidly rotating planetary structure in their wake. A reasonably large fraction of these bodies are above the corotation limit and form synestias. Most terrestrial planets are likely to be forced to become synestias multiple times during formation. ?

The Earth is no exception and during formation our young planet was likely very different than the temperate, slowly rotating body we know now. The discovery of synestias has important implications for the properties of the terrestrial planets in our solar system as well as distant star systems. In particular, the prevalence of synestias will change our understanding of how the Earth and Moon formed.

It's not just about rocky planets

Terrestrial planets are not the only bodies that could form synestias. Stars, gas giant planets and water worlds all could exceed the corotation limit. The previously unrecognized structure of synestias may hold the key to understanding various aspects of our universe.

If you want to know more about synestias, how they are formed and the implications for the formation of planets, you can find the full journal article here. A pre-print version of the paper is also available on the arXiv open-access server here.

If you want to know more about any particular topic, just hit one of the questions marks. These asides will give you more in-depth information about synestias and hopefully give you a little more food for thought.

Synestias are formed when a planetary body exceeds the corotation limit. The corotation limit is reached when the equator of a body is rotating as fast as a satellite would if it were in orbit. When this happens, the outer edge of the body cannot stay rotating at the same rate as the rest and must rotate at slower, orbital velocities.

The transition from a planet to a synestia is illustrated in the figure below. Each column shows an Earth-mass body with the same angular momentum (same amount of rotational inertia, learn more here) but with the bodies getting hotter from left to right. The top row shows pressure contours through each body, so that the rotation axis is along the vertical axis on the page. Yellows are lower pressures and blues are higher pressures but the important thing to notice is the shape of the body. As you go from left to right the body changes shape dramatically. The planet on the left is a flattened sphere, an ellipsoid, but the two bodies on the right are much more extended and look a little like flying saucers. This is because the body on the left is below the corotation limit and the two on the right are above the limit and are synestias. But what happens at the corotation limit that changes the shape?

The second row shows the angular velocity of each parcel of rock in a slice through the equator of the body, with each parcel a black dot. Angular velocity is the revolutions a body does in a certain period of time - the same as revolutions per minute for your car engine. The body on the left is below the corotation limit, so the whole planet is rotating at the same rate. However, the body in the middle is hotter and so it is more expanded. As the body expands, the outermost edge begins to rotate at the same rate as satellites in orbit, given by the red line. The parcels of mass in the outer edge can't keep rotating with the rest of the body and adopt near-orbital velocities. The region that is not rotating with the rest of the body we call the disk-like region. 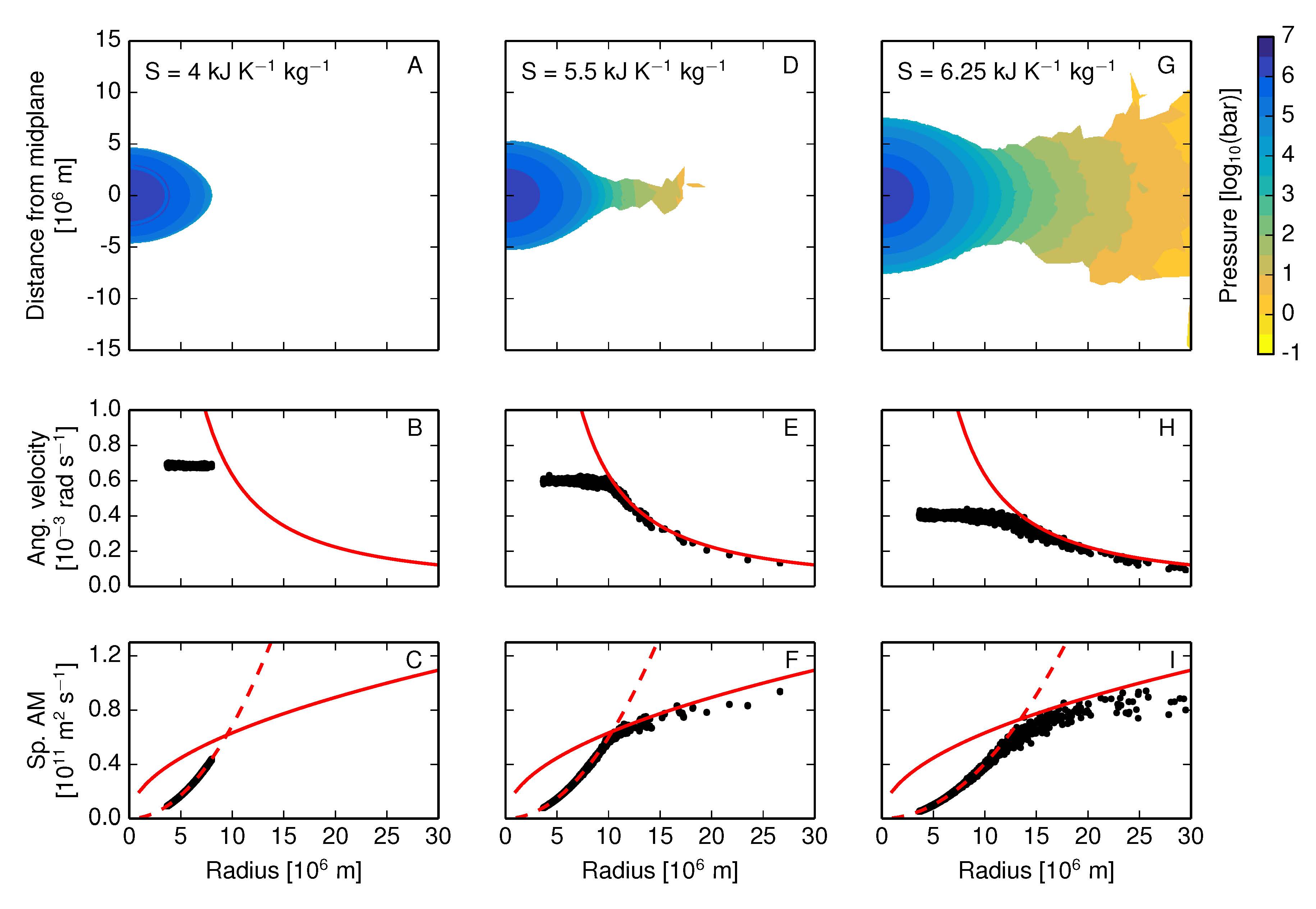 What's in a name

We name structures beyond the corotation limit synestias. The name is derived from combining the Greek prefix syn, meaning together, with Hestia, the Greek goddess of architecture. Hestia means hearth and was closely associated to home life as well as buildings and structures. The name synestia therefore loosely means 'together structure' to emphasize the continuous nature of synestias.

Synestias can have a wide variety of shapes from ellipsoids with fins of material extending from the equator to giant red blood cell-shaped structures. The figure below shows a range of the possible shapes and sizes of a body of the same mass but varying thermal and rotational states. Shown are pressure contours in cross sections through each body with the rotation axis parallel to the vertical axis on the paper. Hotter colors are lower pressures and colder colors are higher pressure, but the most important thing to notice is the shape of the bodies. The bodies are getting hotter from left to right and the angular momentum (amount of rotational inertia, learn more here) of each body is increasing from top to bottom. Bodies to the left and above the red line are all rotating as solid bodies and are therefore are all squished spheres, ellipsoids. In contrast, bodies to the right and below the red line are synestias and can adopt a wide range of shapes and have a large range of sizes. 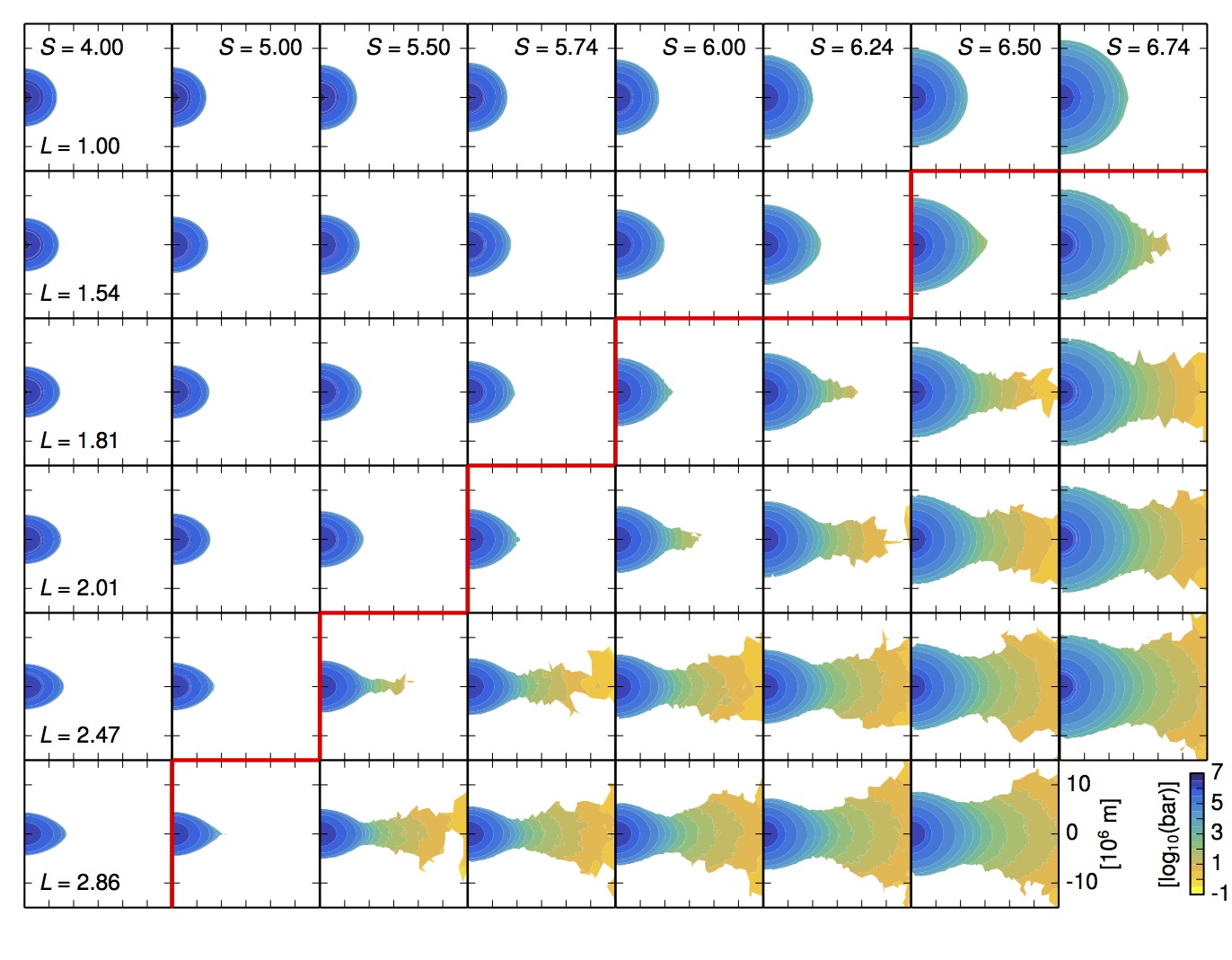 Terrestrial planets grow by collisions between different bodies. The most energetic of these collisions are called giant impacts. How likely are giant impacts to generate a synestia? We have analyzed the results of simulations of growth of terrestrial planets (see here or here). We expect most planets to be rapidly rotating at the end of formation, but we need to know how many impacts have sufficient energy to push a body above the corotation limit to form a synestia.

We find that most bodies that form large planets (with a mass greater than half the mass of the Earth) experience many impacts that could form synestias. The figure below shows the fraction of bodies that experienced a given number of impacts that had enough energy to possibly produce a synestia (black line) and to produce a high-energy synestia (red line) in a suite of planet formation simulations. Almost all the bodies experienced an impact with enough energy to form a synestia. 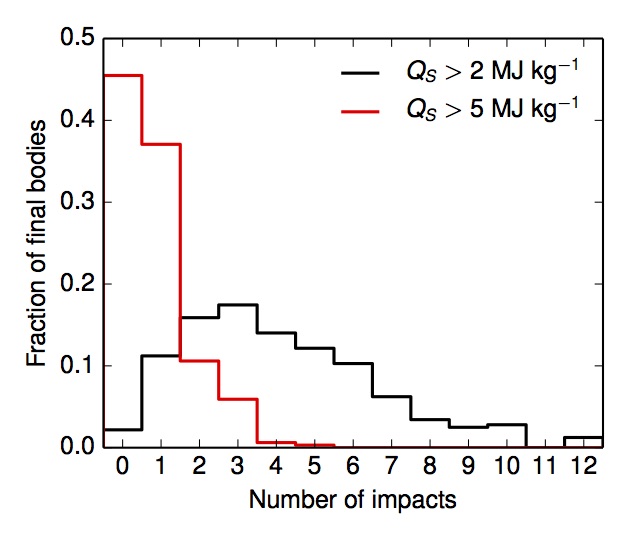